Instead of the usual Chingay floats, our #HeyChingay50Bus campaign will transform selected public buses as reimagined Chingay floats with unique in-bus experiences for commuters. These Chingay50 Buses are now on the roads of Singapore to surprise residents and bring cheer to residents all around the island 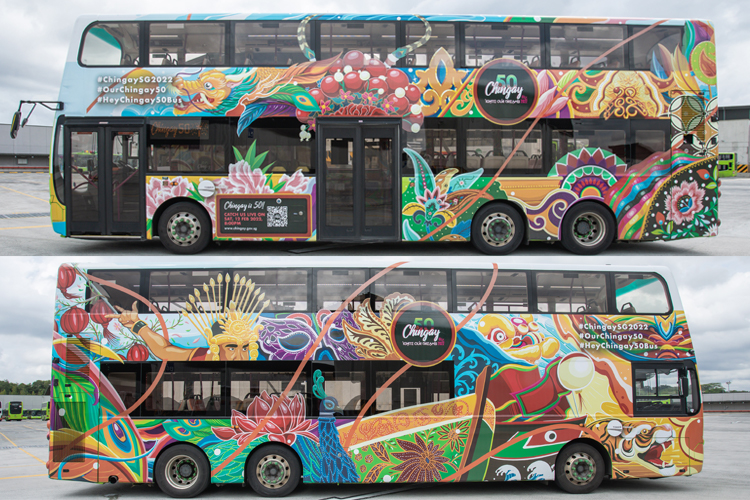 The inspiration comes from the colourful display of elaborate floats, costumes and performances of past Chingay Parades that showcased the rich multi-cultural elements and creativity, as well as people from different cultures coming together in harmony to celebrate. This harmonious celebration is built upon mutual respect and support.

The design uses a transitional collage with a modern twist to combine different elements across eras, ethnicities and cultures. 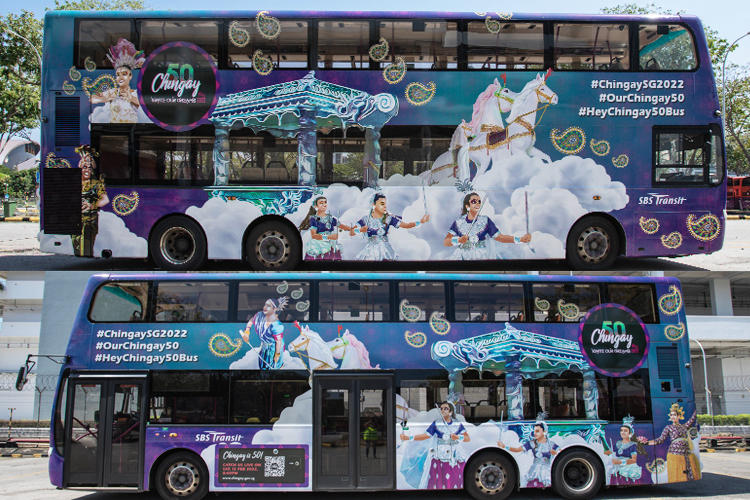 The Indian community, led by Narpani Pearavai, have regularly presented rich cultural performances at Chingay Parades. This majestic design is reimagined from the “White Horse Chariot” float presented at Chingay 2018, accompanied by drummers and dancers performing with the dandiya sticks. The silver chariot is commonly seen during local Indian festivals. 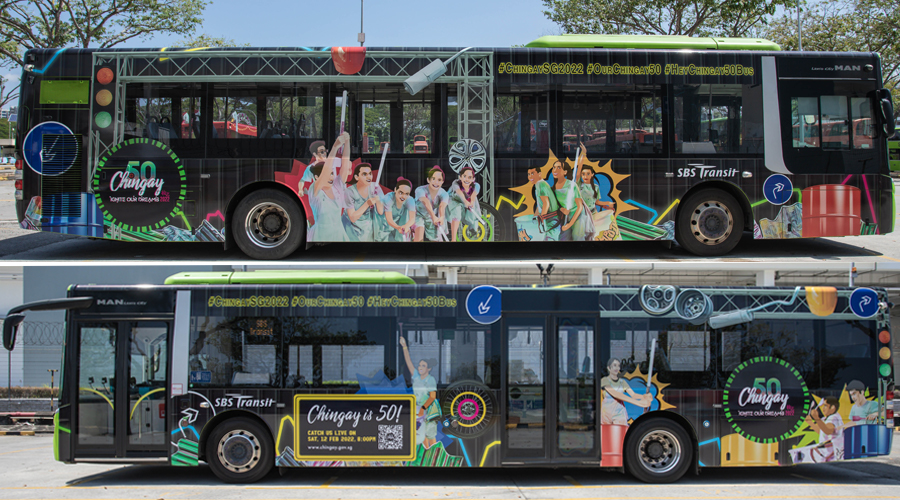 This design is inspired by the “YouthResilient” float presented by the People’s Association Youth Movement (PAYM) at Chingay 2017.

Chingay is a People’s Parade and through the years, youths have always formed a core part of Chingay, be it as performers or volunteers. Many students from various educational institutions have participated in Chingay over the years and the parade would not have been a success without many of these youth volunteers working tirelessly behind the scenes.

This bus is a special tribute to all the youths who have participated in Chingay. 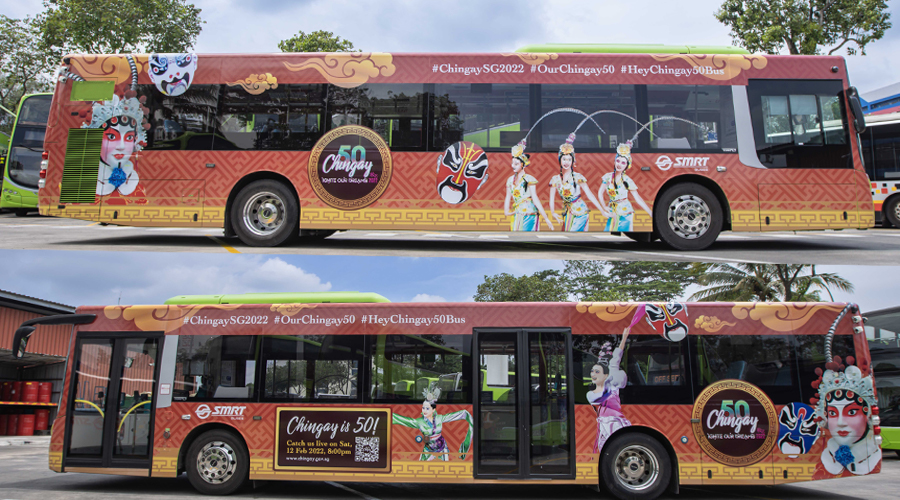 This design is inspired by the “Chinese Opera” float presented at Chingay 2013, jointly presented by Teochew, Hokkien and Cantonese Opera Groups in Singapore.

The float showcases unique elements of Chinese Opera - a form of performance art which tells audiences a story through singing and dance movements. There are four main roles - 生 Sheng (the male), 旦 Dan (the female), 净 Jing (the painted faces) and 丑 Chou (the jester). 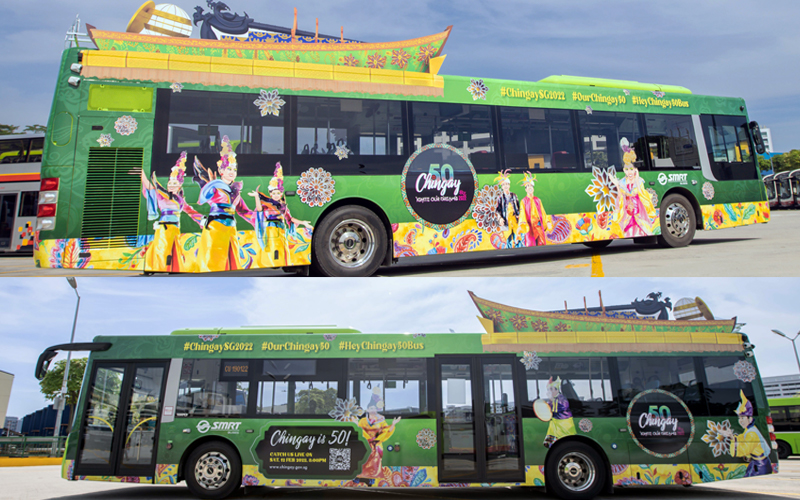 The Malay community presented the largest cultural segment in Chingay 2011 titled Warisan Ku Gemilang. The accompanying float was shaped like a traditional sailing ship (Bugis perahu) with a traditional betel knife (kacip sireh) and a copper container (tepak sireh) that is symbolic of humility and strength. This float is the inspiration for this bus design. 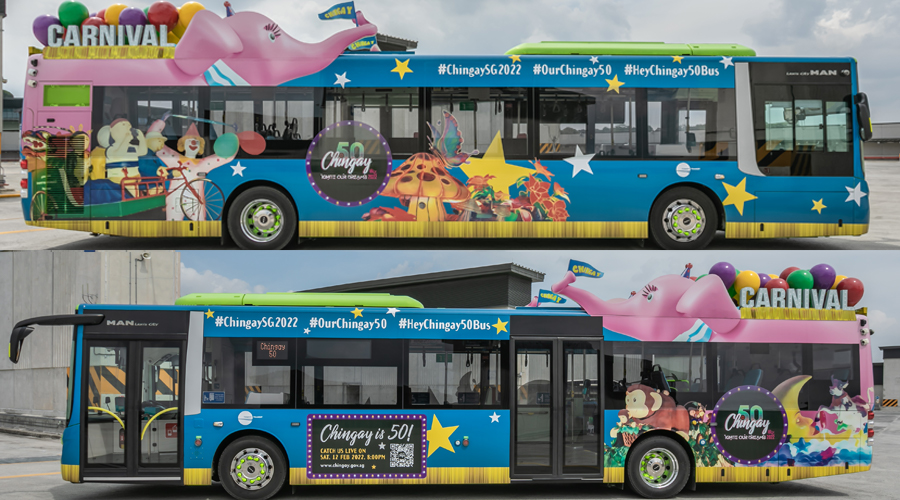 This design is inspired by the “Musical Wonderland” float that made its appearance at Chingay 1994. It featured delightful circus clowns and their friend Jumbo the elephant. That year, the Chingay floats featured familiar characters including sea creatures, a Mickey-inspired airship and the Bookworm (an icon from the popular storybook series). 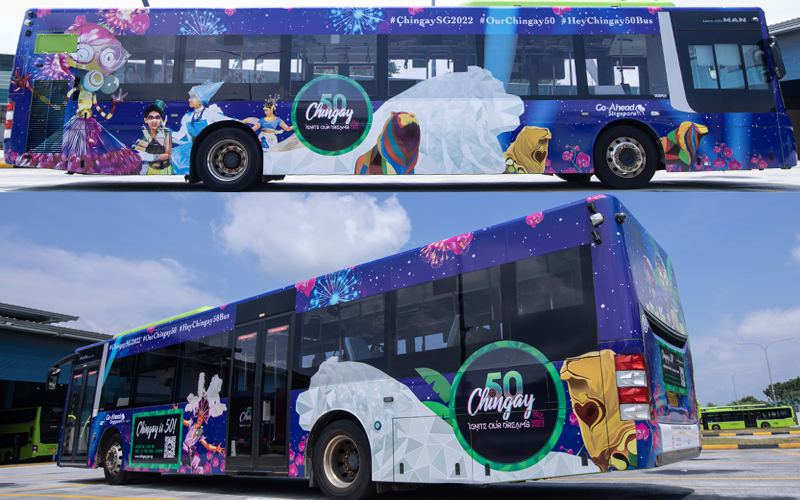 This design is inspired by the “Pride of Lions” float presented by Singapore Tourism Board at Chingay 2008. This float brings out our uniquely Singapore Spirit that is exemplified through Chingay as a multi-ethnic and multi-cultural People’s Parade. This was firmly established in the 2000s. 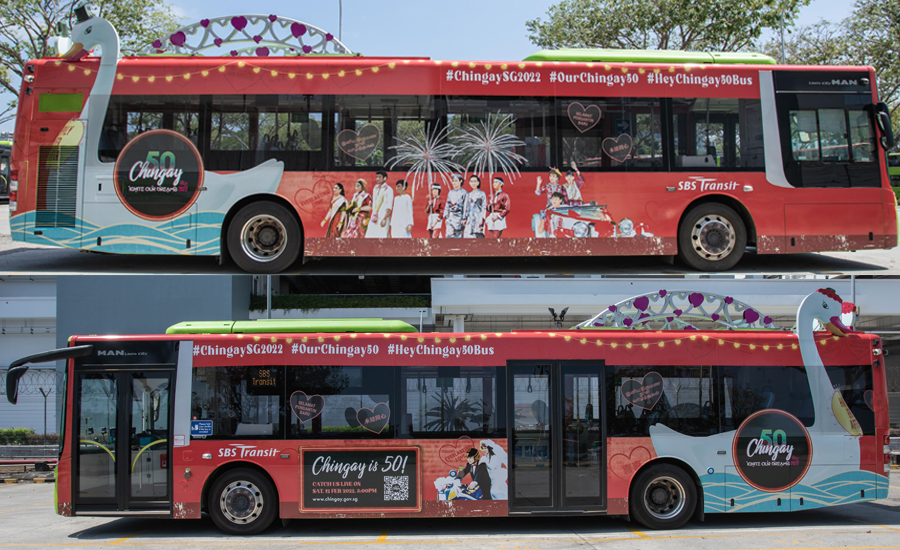 This design is inspired by a wedding-themed float presented at Chingay 1988 to spread love and happiness.

Weddings are joyous occasions, celebrated by all communities while Chingay is all about celebrating people, festivities, and our cultural diversity. Hence, wedding showcases are frequently featured at Chingay Parade. 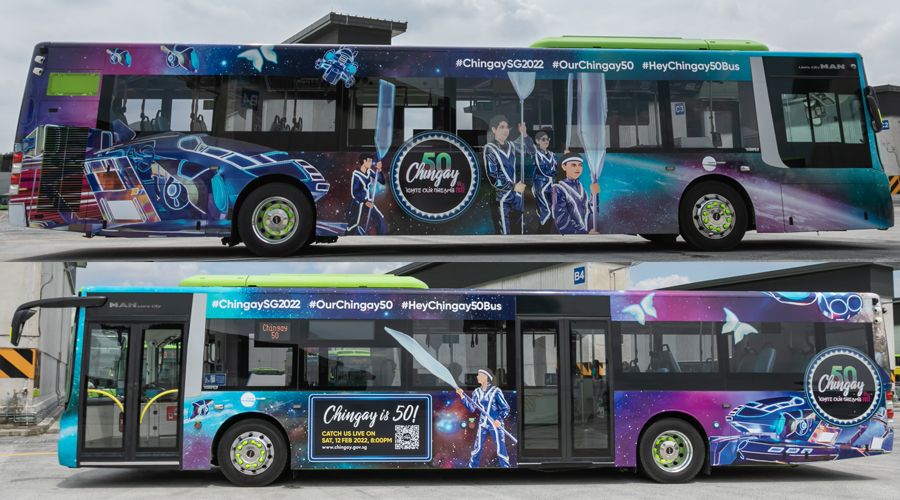 Be transported into the world of Chingay in this futuristic looking bus inspired by a spaceship-themed float that made its appearance at Chingay 2019 Finale.

The futuristic float represents future Singapore as a Smart Nation, where Singaporeans tap on innovation and advanced technology to enhance the way we live, learn, work and play. 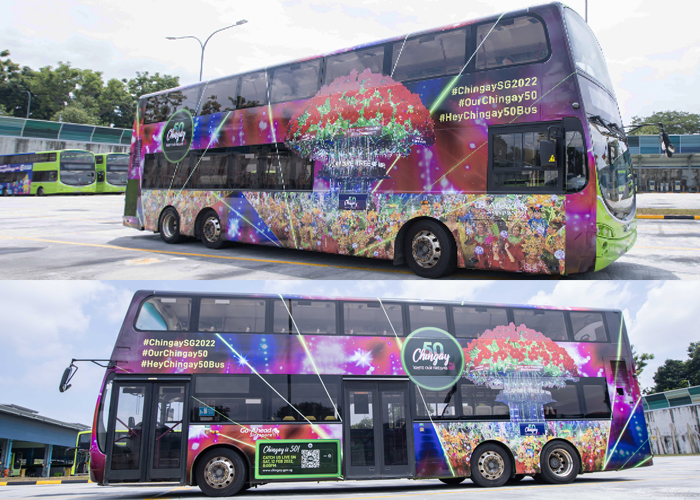 The design is inspired by the “Singapore Tree of Hope” float presented at the finale of Chingay 2015, which was a celebration of Singapore’s Golden Jubilee.

The giant tree carried the values and visions of our community and represented the hopes and dreams of each Singaporeans, as Singapore moves towards SG100. 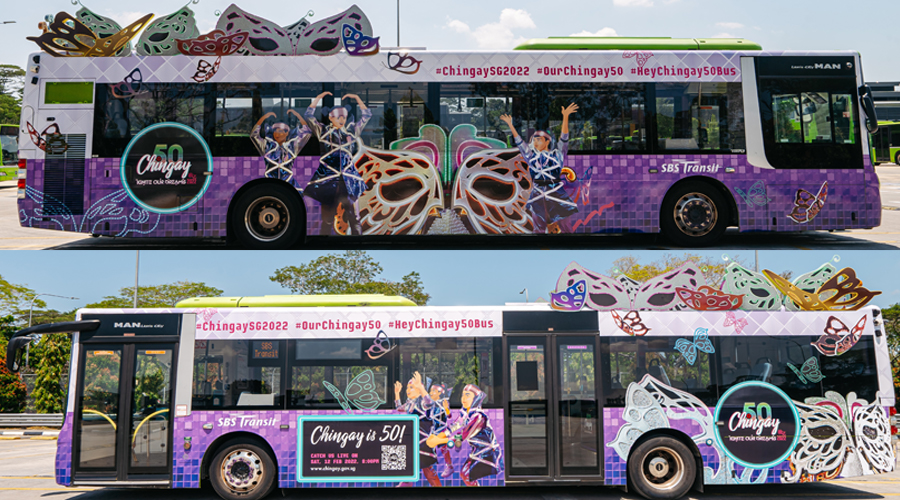 The word Chingay is equivalent to the Mandarin word 妆艺(zhuangyi) which means the art of costume and masquerade in the Hokkien dialect. Inspired by the “Masquerade” float presented at Chingay 2019, this eye-catching bus embodies the passions of various groups in delighting Chingay audiences with diverse and exciting performances every year. 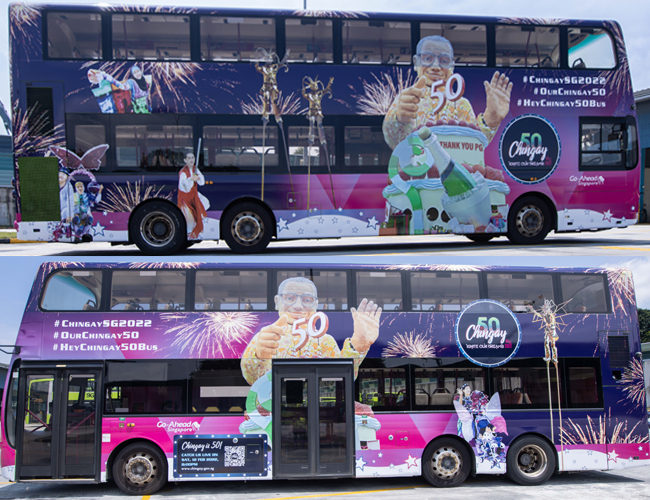 This design is inspired by the “Pioneer Generation” float – the tallest float in Chingay’s history at almost 4 storeys high at Chingay 2015.

The float was created to celebrate SG50 in 2015 and to pay tribute to our pioneers for their contributions to Singapore. 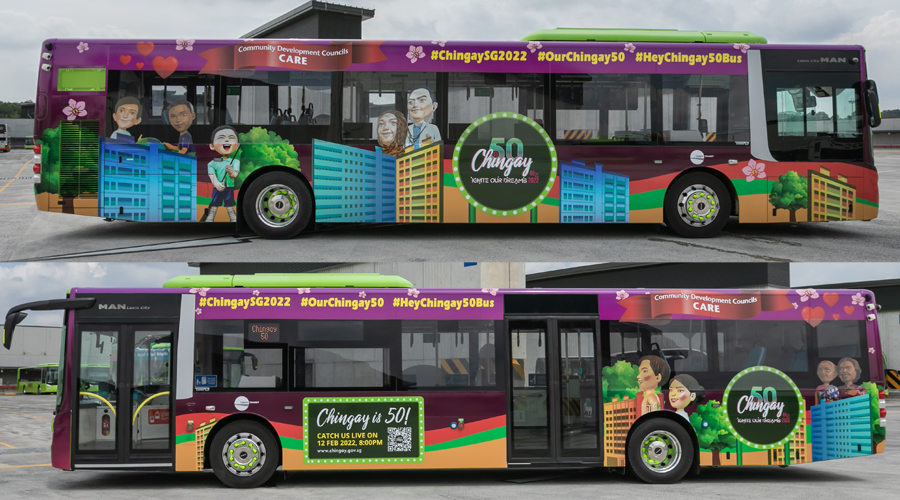 This design is inspired by the Community Development Councils (CDCs) Care float presented at Chingay 2014. CDCs have been a long-time collaborator of Chingay. In addition to presenting floats and performances, CDCs have also worked with Chingay to bring more than 50,000 beneficiaries to the parade over the years under Chair for a Cause @ Chingay - a charity programme mooted in 2011 to spread festive cheer, warmth and care to vulnerable families, their caregivers, and volunteers This design is inspired by Chingay’s most iconic float, a 9-metre-long papier-mâché “Tiger” float that made its first appearance in 1974, leading the 2,000-strong Chingay Procession to usher in the Year of the Tiger then

A REIMAGINED CHINGAY FLOAT
Brought To You By: