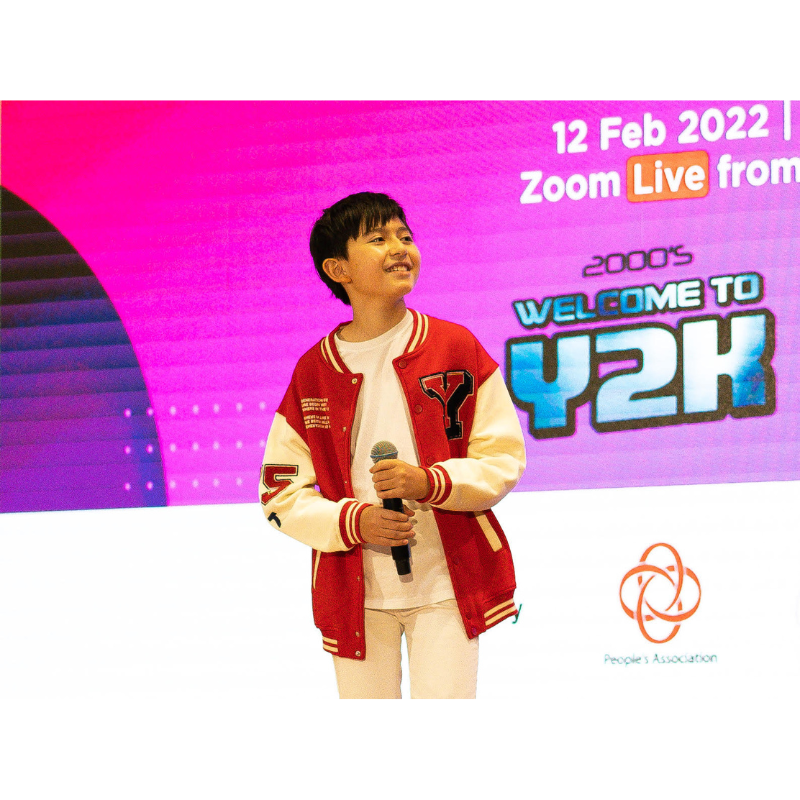 For 13-year-old Asher Mendelsohn, performing is a passion. This year, the submission to Chingay’s We’ve Got Talent! (WGT) 2022 unlocked a significant milestone in his life as a performer.

Nothing fazes him. Not heavy commitments, or having to forego goodies such as pineapple tarts and bak kwa to be at his best for the longest solo performance of his life.

“When I grow up, I want to be a singer!” says the teenager with a certainty that has only strengthened since his first brush with music and performance when he was no more than five years old.

A very active child according to his mother Gillian, Asher was easily distracted,  at times exasperating when he would not stay still or pay attention.

But something clicked in him when Asher watched his kindergarten class perform. Instead of his usual daydreaming or wandering, Gillian noticed that Asher was extremely focused on the singing and dancing the entire time.

Later, Asher asked to attend performance arts enrichment classes. Gillian and her husband, realising that Asher’s natural inclination for singing and performing, supported him in exploring his dream.

Initially, Gillian and her husband felt that the performing arts was just a pathway to help their children develop self-confidence and express creativity. But as time passed, they saw that it was something much more for Asher.

“When we see Asher so comfortable, confident and happy on stage or in front of the camera, we started thinking that maybe we should let him have more opportunities to develop his passion,” Gillian explains.

Fast forward almost 10 years later, Asher is loving what he does more than ever – now trained in singing, musical theatre, piano, guitar, violin, music theory, dancing and songwriting. You may even recognise him from various commercials, as well as his role as Alec in Mediacorp’s 128 Circle Season 2!

Asher’s Chingay journey began in 2021 when he submitted his video for WGT 2021. His submission was featured in a dance collage together with other submissions in the online event that year.

Then came 2022, where Asher sent in another recorded performance online. While he wasn’t selected as a finalist, another door opened. He got a chance to do the longest solo performance in his life.

“I was very excited when the WGT Committee called my mum several months after my submission and invited me to perform at the Chingay Pasir Ris East Pop Up Art Village!”

“The theme of the Chingay Pasir Ris show was Back to the 2000s, and luckily I knew some songs from the 2000s. I sang Put Your Records On by Corinne Bailey Rae,  倔强 by Mayday 五月天 and Burnin’ Up by the Jonas Brothers,” he shares.

Asher spent the two weeks before his performance practising, while juggling several commitments as a secondary school student, artiste, and performing arts student. He shares that he practised a lot as he was very excited about performing in front of a live audience after two years of COVID-19 restrictions where live performances were halted across Singapore.

“I wanted to make sure that I won’t disappoint the audience!”

Asher elaborates, “As the Chingay performance was after Chinese New Year and so sadly, I couldn’t eat much pineapple tarts or bak kwa because “heaty” food might affect my vocals.

But my mum bought me some after the performance was over so it was all good!”

Pure commitment to his craft, indeed!

Asher hopes to see Chingay grow to be like a big party for Singapore where everyone celebrates together in their neighbourhoods.

“Perhaps there could be more activities for children and teenagers – for example, esports, storytelling competitions, dance-offs, costume parties,” he suggests.

When asked if he would participate again in 2023, Asher’s reaction was an enthusiastic one.

“I’d definitely do so if I have the chance!”