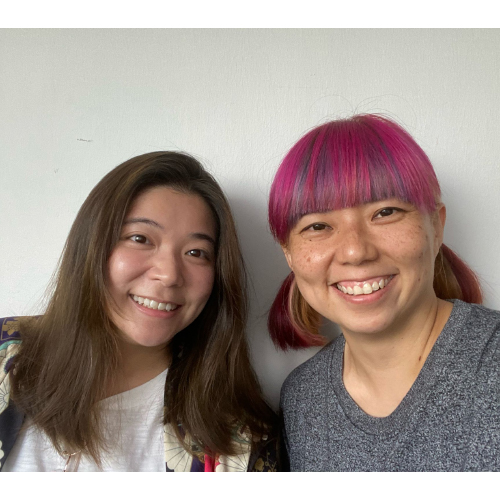 An aunt and niece team working together to build Chingay50 Mini Floats, bonding with the communities they took charge of and creating enduring memories for all.

One Mini Float was titled Co-Exist – a giant butterfly put together by the residents of Tanjong Pagar GRC and Radin Mas SMC. The other was a hornbill, that had the name Foodie Birdie, which encapsulated the efforts of residents of Pasir Ris-Punggol GRC and Punggol West SMC.

Yet, both bore the hallmarks of an enduring aunt-niece team of Didier Ng and Cherie Ng, which has blossomed out of a mentor-mentee relationship to become one of the creative forces of Chingay50.

Through many workshops at community centres and Residents’ Committees (RCs) premises, Didier and Cherie either worked as a team or operated individually to bring to the community the joy of working on a project together, leading Grassroot residents to bring to live two of the 17 Mini Floats for Chingay50.

Together they upcycled trash into art, teaching the participants to work with discarded items such as factory rejects and materials that are hardly new, reusing household items and teaching about the importance of recycling and loving nature.

For 40-year-old Didier, her involvement in Chingay started half a dozen years ago, when one of her artist-mentor was invited to create, and she was asked to help out with community craft. Every year since, she has been involved in one way or another, be it to fix the floats, or prepare the props, conduct workshops, or partake in impromptu projects such as painting on some sculptures.

“I studied product industrial design and can work with any material”, she said. “There were always many ad hoc projects, heaps of ideas to work on and create, and I’ve always been asked for advice.”

Along the way, she roped in young Cherie, from when she was 12 or maybe 13 years old, to get her hands on small things.

“She would get her classmates involved as well”, recalls Didier, who was delighted that Cherie developed a love for craft as she grew up.

It was no surprise that her niece would go on to become a lead artist, the youngest in fact, for a Chingay50 Mini Float.

Leading From The Front

Everything begins with ideas, which in turn get transformed into items to be assembled into the Mini Floats.

“I previously helped Didier as assistant artist but this year they opened up a few more slots, and I managed to get a lead artist role instead”, said Cherie, who graduated two years ago with a Diploma in Industrial and Operations Management from Republic Polytechnic.

“As Didier’s assistant, I got to see her hosting the live workshops, but now I got to do my own ones. And we ran everywhere to do workshops, hosting one or two every week.”

They also met with interesting characters, such as one Uncle Patrick who became really involved, helping to collect materials and cutting said materials to shape until blisters formed on his hands.

And then there were the aunties who brought home-cooked food to share at the workshops, or offered to get bubble tea.

“One auntie even packed Christmas gifts in advance”, recalls Didier.

With participants from each workshop contributing their items to the floats, it was up to the leaders – Didier and Cherie – to ensure enough items were created to be assembled onto the floats, and also make certain nothing goes to waste.

“Each float has a weight limit”, said Cherie, “and we worry at times whether the float will become too heavy. But we also fret about whether there are enough items, or too many, to make up a float… so it was a delicate balancing act.”

“Apart from being a creative lead, Cherie continues to help me a lot, such as with computer stuff which I really dislike!

“We also have a good relationship with Chingay. This annual project is an enjoyable one and I think if I don’t enjoy doing a project, I would not do it even for a lot of money.”

“Give me all the floats, let me curate the floats,” Didier implores with a laugh, but her true dream for Chingay is to see more youngsters join in the fun of building the floats, together with the aunties and uncles.

Cherie echoes her aunt in this, hoping to attract more teenagers and young adults to Chingay as spectators.

“My peers know about Chingay but they don’t say ‘Let’s go watch it together’ ”, she said.

Both also hope for a quick return to physical Chingay where one can go watch the parade in person.