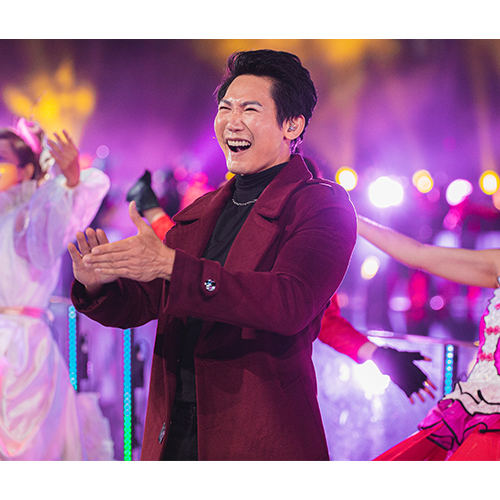 George Chan, a freelance director, choreographer and performer, has been involved with Chingay since 2009, taking on various performative roles and loving every moment of it – even overcoming his fear of heights along the way.

It started with a bang, so to speak, being cast in the leading role of the King of Chingay Wonderland. That was back in 2009, when George had first returned from Europe, and was actively involved in the musical theatre scene in Singapore.

“They needed a male singer to collaborate with opera singer Nancy Yuen, so they called me up!” recalled George. “I thought it was a wonderful opportunity to do a big event in Singapore, so of course I said yes!”

What George didn’t count on was that maiden performance would see him taking on his fear of heights.

“I had to be hoisted up by a cherry picker and paraded through the venue,” he recalled. “The headdress I had on then was also very big… so when the wind caught the headdress, it was hard to balance myself.

“It was a bit of a fearful experience, and the only challenge of my involvement with Chingay so far.”

Counting Chingay50, George has been involved on six occasions playing various roles. After being the King of Chingay Wonderland in 2009, he was the singer and reciter for Song of Righteousness (正气) in 2013. In 2014, he was a singer in the item Paint with One Heart, and in 2016, he performed on Chingay’s first-ever sky stage. Prior to the Covid-19 pandemic, he was a reciter with the Singapore Bicentennial item, and took on the role of a monologue character this year.

But what has endured has been the spirit of friendship, and the camaraderie of working with so many people along the way.

“The friendships I made are very special, probably one of the most important and precious takeaways I have from Chingay,” says George.

“I’ve come to know a lot of people from when I started in 2009, and when I go back I still see a lot of the same people. Coming together and catching up every now and then, we end up developing a lot of friendships.”

For George, the community means a lot and “it’s also about voice – people coming together to have a voice and say something.”

Chingay50 was not just a milestone for its organiser, the People’s Association (PA), it also proved a landmark for its performers.

“It certainly was a milestone for me also, having done a few Chingay Parades and being able to come all the way to its 50th anniversary,” said George.

“I found it very hard to pick myself up during COVID-19, and keep driving myself forward,” he confessed. “But the creative team here at Chingay was pushing through all the way. It really wasn’t an easy feat, so that really inspired me.

As a freelance performer, George is always looking for opportunities to express himself, shows and projects that would challenge him, yet bring him joy.

“That’s why Chingay is a wonderful gig to have, and I’m very glad that Chingay always gives me great platforms to perform on,” he says. “It’s a blessing when I get to sing a great song or do a great show in front of such a large warm audience that claps for you. PA gave me that opportunity and I’m very thankful to them.”

“I have a lot of admiration for PA, particularly the creative departments and Chingay organisers,” says George. “They really managed to look at the situation and reach out successfully to the younger people, hence expanding their overall audience. So, for the future of Chingay, I guess they are going to keep evolving!

“I hope there will be a Chingay60, Chingay70 and even Chingay80, and by that time, even if I’m sitting in an old folks home with a cane watching, I will still be involved in some way.”