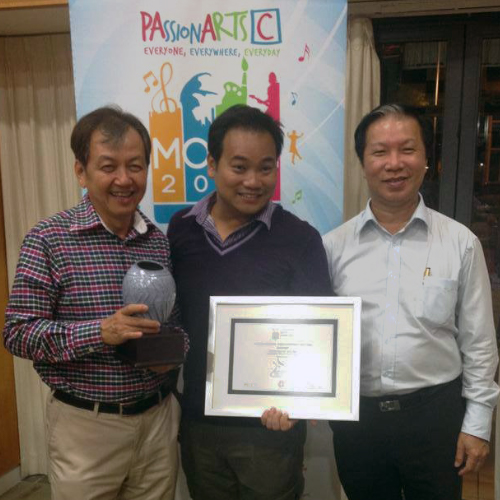 Veteran grassroot activist Gerald Tang has had many past involvements with Chingay but none has been as heartening as his role in leading the creation of the mini float to represent Tanjong Pagar GRC and Radin Mas SMC for Chingay50.

At just 44, Gerald can boast of a 25-year involvement in grassroot activities, starting from Residents Committee work in his teens before joining the Community Centre to contribute his time and effort.

Twice chair of his local constituency group for Chingay @ Heartlands, Gerald has also taken part in PAssionArts Festivals, which his Community Arts and Culture Club (CACC) organises yearly. He recently took over the chairmanship of his local CACC, continuing his grassroots involvement.

Taking Up The Challenge

Taking the lead for this year’s Chingay50 project was another challenge met.

“This float represents both the Tanjong Pagar GRC and the Radin Mas SMC, and as the chairmanship is rotated every year, it was Radin Mas turn to take up the challenge”, he noted.

“We had to work with various constraints brought on by Covid-19, with safe distancing measures in place and also a limit on the number of participants allowed to gather.

“As both Tanjong Pagar and Radin Mas are matured estates, we also have a lot more senior citizens, many of whom are active in the arts but we had to restrict their involvement to keep them safe, and thus relied more on our younger residents.”

The People’s Association assigned a couple of helpful and dedicated artists to Gerald’s group.

“Within a short time-frame, we got things going. With the help of Didier Ng and Cherie Ng, the two artists, the mini float took a month to complete”, Gerald revealed.

While the initial plan was to build a bird as the Mini Float, Gerald persuaded the artists to change it to a butterfly instead.

“I proposed the change simply because it was appropriate for Radin Mas, as we also shape our R and M into a butterfly mascot”, Gerald explained.

“Plus, the symbolism of metamorphism is very much like how the constituencies of Tanjong Pagar and Radin Mas have evolved with time.

“It was also great to see our volunteers and participants coming in to help build up the icons for the mini float, using recycled material, and keeping the cost low. The Merlion was made of disposable spoons, the Singapore Flyer from paper fans, all collected not bought. Dried leaves were pasted on the sculpture to make it more realistic”, Gerald elaborates.

An Occasion To Gather

It took much team work to build a Mini Float and technology played a hand too.

“We met the artists over Zoom even before we met in person, laying the groundwork before conducting the workshops for residents”, he said. “And even when Zoom presented a challenge, we made it a learning journey for everyone.”

“The workshops also became a reunion of sorts for the CACC chairmen and vice-chairmen of past and present – we had a great time catching up with one another. The workshop helped to bring back memories for all of us also.”

Gerald hopes to see something of a return to the format of the pre-Covid-19 past, where people really gathered to celebrate, rather than the digital events we’ve had for past two years.

“To me, Chingay is like another National Day Parade but a wonderful way to celebrate the arts”, he said. “I hope we can return to the past where we gathered a few thousand people at a single venue for such fun and revelry.

“As for the future, I foresee an even more high-tech Chingay coming up, where we’ll be using more colours, more creativity and maybe also AI (artificial intelligence) making an appearance or even becoming a regular feature.”