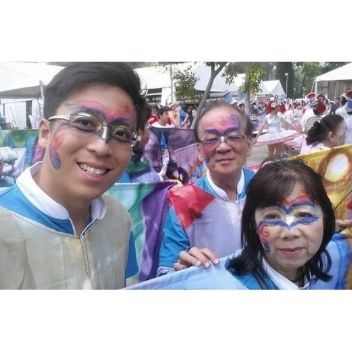 Performing with his parents at Chingay 2015 strengthened Ian Koh’s family ties and created forever memories, some of which can never happen again.

Chingay 2015 was the first and only time Ian Koh and his parents performed together as a family. An only child, Ian recalls this unique experience as of among the fondest memories for the family before his father succumbed to cancer the following year.

The Koh family had been enthusiastic Chingay participants. Both parents performed in two previous parades while Ian volunteered as a photographer for their ukulele group in Chingay 2014. In 2015, Ian seized the opportunity to join his parents as a fellow performer at Chingay. He experienced the entire journey from the multiple practice sessions, rehearsals to the actual high of the performance itself alongside his parents. “Simple moments such as our little snack breaks and sweating it out together are precious memories,”

A Journey of Transformation

Their performance troupe comprised various ukulele groups from around Singapore. People’s Association (PA) assigned this group of volunteers the butterfly dance and choreographed their routine. Their costumes were designed with a wood and metal frame that fitted across their shoulders to show off brilliant “wings”. The troupe had to constantly remind themselves to stand a meter apart so they could flap their wings with grace or gusto throughout the parade!

Finding time to practise was a challenge for Ian because the sessions were always on Saturdays, which clashed with his work. To ensure they put up their best show, Ian and his parents carved out time at home during the week to make sure they showed up well prepared. To Ian, this was the beauty and advantage of performing as a family – impromptu practices at home. He cherishes the times his family spent helping one another perfect the moves, enabling the butterfly dancers to “take flight”.

It’s All About The People

To Ian, Chingay is a platform that helped him forge stronger bonds with his parents, the team of performers as well as the wider community who look forward to the parade. He feels that a little patience, kindness and a good dose of humour helped his parents and other group members, who were mainly senior citizens, remember and synchronise their routine.

Over the years, the Koh family has watched Chingay on TV or lined the streets with their neighbours to enjoy the floats as they wove around their housing estate. These happy memories boosted their stamina over months of practice that began in October 2014.

As with all major events, there was a lot of waiting around in the packed waiting area during rehearsals and on the actual day. To keep their spirits and energy levels up, the loving son and three-time National Day Parade (NDP) veteran made sure he brought enough fans and cold drinks in chiller bags to keep his parents hydrated and refreshed.

Reflecting on how Chingay has a special role in Singapore’s nation building, “Chingay allows diverse interest groups in multicultural Singapore to showcase their arts and cultures. Participating in the parade and watching it helps us understand what they stand for and fosters greater unity between people from various cultures.”

Ian believes Chingay is on the right path in keeping the community and cultural spirit alive. He hopes to see Chingay continue to attract stronger interest from Singaporeans and grow to match the grandeur of NDP.