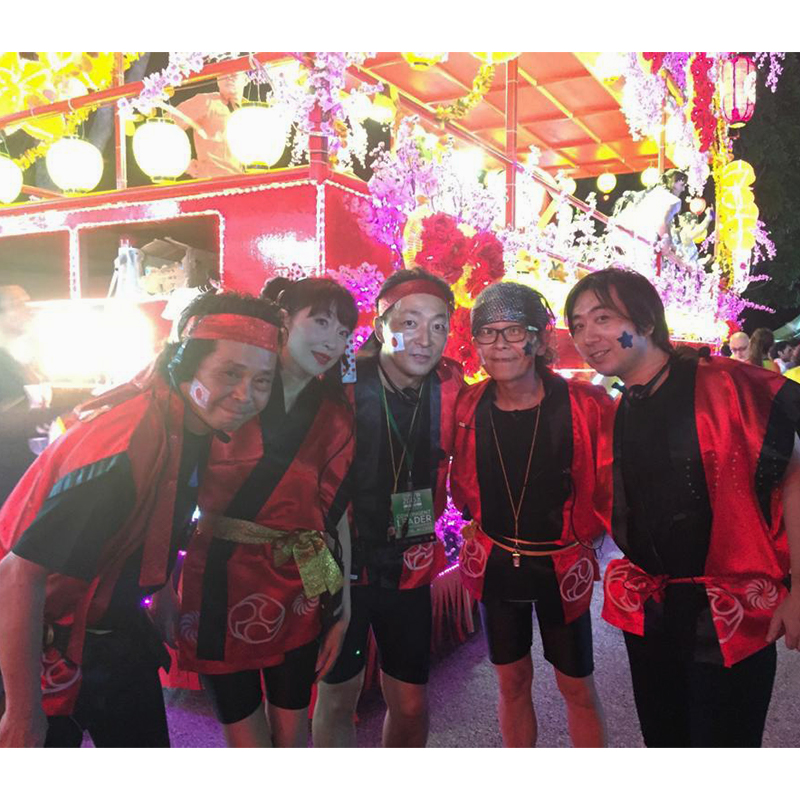 The Japanese Association Singapore’s 20-year participation in Chingay is highlighted not just by its win in 2014 for Best Float; it also represents the Association’s connection with Singapore as a home away from home.

It Started With A Song

Back in 2002, the Japanese community in Singapore decided to dedicate a song to their Singaporean hosts, a song specially written to represent their feelings of being here. The “Ondo” is a Japanese folk music genre, a music for the soul, so to speak.

Toba Takashi, a 52-year-old company director, was here when it started and has been a project member and performance director since the Japanese Association Singapore (JAS) first participated in Chingay in 2003. Since then, Takashi has worked with composers every year to produce the original music and match it with dance choreographers and costume designers.

“20 years ago, a JAS staff member brought up the idea of this song”, he says. “We thought it was a brilliant idea, wrote it up and started singing and dancing to it. That was how Singapore Ondo started.

“In Japan, we have the annual Summer Festival, where people gather to sing and dance outdoors, so we took the chance to introduce this in Singapore. We want to hold hands and sing and dance with Singaporeans, with the music and dance acting like a bridge between Singapore and Japan.”

The Singapore Ondo paved the way for the JAS’s initial participation in Chingay, and it came after an invitation from Singapore’s then-President S.R. Nathan.

“We were so proud to be invited”, recalls Takashi. “Because we have this song, we had to make an original dance to go with it, and also traditional costumes, so we could look good in the parade at Chinatown.”

Over the years, participating in Chingay became an annual highlight for JAS, as many local students also joined in the Japanese float at Chingay. Then came the proud moment in 2014 when JAS was crowned Champion Float that year.

“We shed happy tears that year”, shares Takashi. “Considering nobody really knew how to go about it in the first year, to winning the Chingay… it was like going from zero to 100. It was a moving experience.”

For Kawashima Kensuke, a 40-something Operations Manager, there has been a void in his life for the past two years. The rhythm of preparing to compose the Singapore Ondo has been broken by the Covid-19 pandemic which forced Chingay into becoming a virtual affair.

“I’ve not composed the song in these two years”, Kensuke explains.

“Every year, we start the discussion in May or June on how to present Japanese culture in Chingay, how it must be a mix of traditional and modern. From there, I start composing the song which I then present to JAS for feedback.”

“After that, the dance teacher will create the dance, and practice begins. It’s a months-long project from start to finish.”

Company director Akaoka Hajime, 61, ensures the performance on the day runs smoothly. He, too, longs for a return to the physical Chingay of pre-Covid times.

Hajime elaborates, “For JAS, this has become the biggest annual event for us, with so many people involved to make this a success. We’re always thinking about bridging the cultures – we love to introduce Japanese culture to Singaporeans, and also learn more about Singapore culture.”

From an initial team of 20 to 30 people, the group of people involved in JAS’s Chingay has grown to some 350 each year, up to 80 of whom are Singaporeans.

Adds Takashi, “Every year, many wait to join the JAS Chingay activity.”

Hajime enjoys the multiculturalism of Singapore and hopes to form deeper ties with the locals. Takashi looks forward to continue working with the People’s Association “to make this Singapore ‘summer festival’ merrier every year!” Kensuke, who eagerly awaits the next physical Chingay, feels the event has the potential to become well-known around the world.