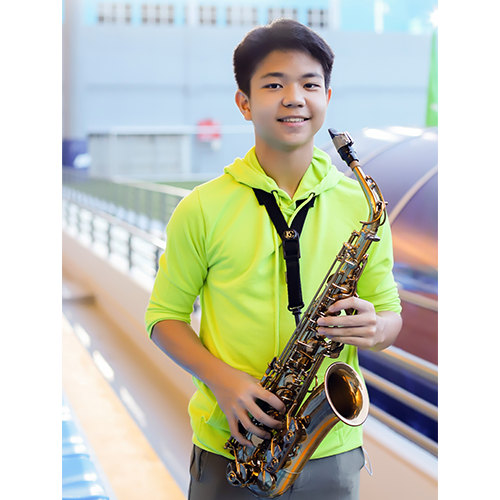 Fourteen-year-old Joshua Low participated in Chingay’s We’ve Got Talent! 2022 competition for the experience. Beyond his expectation, his creative video submission featuring his saxophone act clinched him the Community Star 2022 award, igniting Joshua’s dream for a possible music career in the future.

“Go easy on me…..didn’t get the chance to feel the world around me….”

The music of Adele’s song “Easy on Me” wafted dreamily in the air as Joshua played his saxophone in an open-top car travelling down the highway. In the background, icons of Singapore’s breathtaking downtown skyline glide beautifully along against a clear sky - the Singapore Flyer, the Marina Bay Sands area, then to Singapore’s civic district where the National Art Gallery sits grandly in the vicinity of the Padang. Finally, cut back to the steps of a colonial-style bungalow where Joshua sits, strumming his guitar.

Those were the scenes from the captivating video which 14-year-old Joshua Low submitted to Chingay’s We’ve Got Talent 2022!. The video which creatively captured Joshua’s impressive talent helped him to clinch the Chingay Community Star 2022 award.

Joshua was shocked to win the award because he participated “just for the experience” and he “didn’t expect to win at all”. He also “felt honored to be given the opportunity to showcase my talents and give back to the community” when the reality of winning finally sank in.

It took him all of two days to complete the video. He arranged and mixed the music all by himself. But first, there was the brainstorming session with his family to plan and conceptualise the video for the competition. His father, an event producer, helped Joshua shoot his video submission.

Why did he pick the song “Easy on Me”? According to Joshua, it was a poignant piece particularly during the pandemic as it echoes his hope that things will get better for everyone again soon.

First Solo Gig At The Jewel

A memorable highlight for Joshua winning this award was the opportunity to perform at Chingay50 which was held at the Jewel and live-streamed to audiences. As part of the performance preparation, the People’s Association arranged for Joshua to be trained on the finer details of a live performance. It was a striking coincidence and a delight for Joshua when the person who was to train him turned out to be his former saxophone tutor! It seemed to Joshua that things have come full circle for him.

At the show, Joshua played a rendition of the popular local folk song, Chan Mali Chan, while community talents who were also scouted through We’ve Got Talent! performed alongside Mini-Floats co-created by residents. The newly minted “Community Star 2022” enthused that he was simply energised and awed by the entire vibe and the “grand atmosphere” at the event.

This was not Joshua’s first public performance. In 2017, he also performed at Chingay in an ensemble. “I was in Primary 3 then and the saxophone was almost bigger than I was!” he chuckled.

The experience was not only exhilarating for the young talent, but it has also ignited Joshua’s music aspirations for the future. His performance at the Jewel has opened his eyes to the different specialisations and opportunities that are available in the field of music. The networking and connections he made at the event were also invaluable in showing him the appropriate doors in the field of music. A career in music continues to entice Joshua, but he is taking it one step at a time for now to continue to discover the direction and shape of his music dreams.

Joshua is hopeful that initiatives such as We’ve Got Talent! will make Chingay more “relevant and appreciated” by youths and could possibly attract them to participate in the event. His hope is for Chingay to be a show for people of all ages so that together, everyone can experience and enjoy the show as a community.