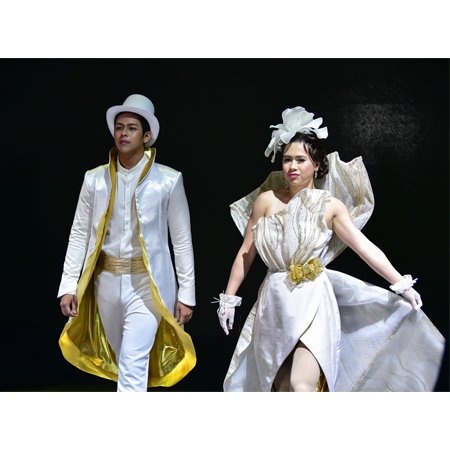 Kevin and Bernadette scored the performance of their lives in their first-ever Chingay appearance—playing the bride and groom in a flower-themed wedding showcasing Eurasian culture.

Neither Bernadette nor Kevin had taken part in Chingay before but in a stroke of serendipity, both of them answered the call from the Eurasian Association, Singapore, particularly Kevin from his dad to perform and ended up being ‘match-made’ in the flower-themed wedding performance. Representing the Eurasians meant a great deal to them: they were proud to bring their relatively small community in Singapore to greater prominence on the Chingay stage. They love how Chingay lets Singaporeans appreciate the cultures of different races; by opening our eyes to how other races live, it promotes multiculturalism.

A Tale Of Two Dancers

Both of them prepared for the performance by seeking advice from the Eurasian Association Heritage and Culture Team. With her dance background, 23-year-old Bernadette found learning the moves from the PA-assigned choreographer a breeze once her “muscle memory” kicked in. “The entire contingent practices about once or twice a week, so it’s not really that high of a commitment, and if you are really passionate about something, you will definitely make the time.”, gushed the bank worker. However, what almost tripped her was her long and baggy costume! Navigating all that fabric while trying to dance elegantly literally kept her on her toes.

On the contrary for Kevin, “Dancing wasn’t my thing”, he confessed. But with the help of the understanding and patient trainer, Kevin overcame his initial dread and managed to memorise and execute the moves correctly and with ease. The duo put up a number that fused Eurasian elements with modern touches in a hybrid style that appeals to the younger crowd.

Thanks to advances in technology, Chingay has evolved from the original street parade to incorporate a studio recording to enhance the overall viewing experience of the showcase. Bernadette and Kevin recorded a studio segment, a very handy Plan B in case stricter COVID-19 safety measurements restricted the planned showcase.

Being first-time artistes, the studio recording was both nerve-wracking and insightful for them. They got to witness first-hand how the recording was taking place and also the many considerations to take into account such as filming, choreography, camera angles etc. Kevin relished the eye-opening and exclusive experience and was clearly impressed by this perk of performing in Chingay, “Entering this large, black room with super high ceilings and smoke machines with the director gave me a glimpse of how everything falls into place behind the scenes.” Bernadette however prefer performing live because it is always very thrilling to perform in-front of a crowd, no matter how big or small the audience are.

Coming Together As One

Not only was Kevin the flagbearer for his Eurasian community, performing in Chingay presented new opportunities for him to make new friends, reconnect with some of his Polytechnic mates and have a wider social network. Although we live in a highly tech-enabled society, he feels nothing beats face-to-face interactions when you want to engage meaningfully with someone. And Chingay provided the perfect platform for him to befriend people beyond his usual social circle.

But what struck Kevin most was realising how much contingency planning underpins every Chingay, ensuring that the show could be adapted to different scenarios. This reaffirmed his commitment to put on the best show because all their efforts would not be in vain. Regardless of how the pandemic evolved, Bernadette and him would be able to showcase their unique Eurasian heritage to a wider audience in Singapore and internationally.

Echoing each other, Bernadette and Kevin hope Chingay continues to evolve so it remains relevant and interesting for successive generations. Kevin’s dream for Chingay is to see more different cultures and backgrounds come and participate to add diversity and vibrancy to this annual event. Bernadette really hopes the younger generations will continue to appreciate Chingay as it is a Singaporean tradition and has been around since 1973. Over the years, Chingay has gradually incorporated different cultures such as Eurasian, Indian and Malay elements and she really hopes Chingay can incorporate younger elements to captive new audience.