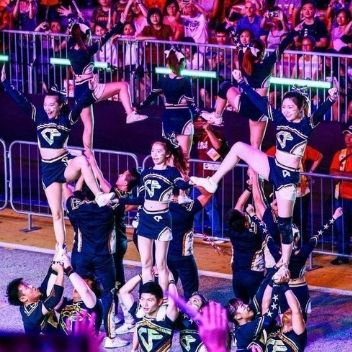 What do chicken rice and a passion for cheerleading have in common? They are among the glue that bound a squad of different races and nationalities for its explosive debut at Chingay 2019.

CheerForce has been making waves and thrilling Chingay audiences with its high-energy and sometimes heart-stopping performances since the cheerleading squad made its first appearance at Chingay 2019. Interestingly and perhaps not apparent to the audience, a third of CheerForce’s performers then included cheerleaders from Thailand and Vietnam, mostly friends and acquaintances of CheerForce Founder and Chief Coach Ng Tian Jun (TJ).

It is no mean feat to pull off a cheerleading performance involving heights, risks and surprise elements. Precision, coordination and synchronisation among team members are often critical for a seamless and safe performance.

The stakes and challenges are even greater when such performance involves a transnational team where each member brings different styles, techniques and traditions to the floor. Add to that the fact that the foreign cheerleaders had never performed in a street parade before their 2019 outing at Chingay.

Indeed, there were challenges. However, as 28-year-old TJ shared, these were not insurmountable.

First, there was the language barrier. The troupe overcame this by using “really simple English”. It also helped that TJ and his brother, who was also part of the squad, could speak simple Thai. Likewise, some in the Thai cheerleading team could speak simple English and Mandarin. Over time, the group also managed to pick up some key phrases, such as counting from one to eight in the different languages.

With the many different moves in their routine, it took some days for the team to reach a consensus on a common technique to adopt. TJ took this very positively because, in the process, team members came to learn from one another and expanded their repertoire of cheerleading techniques.

Initially, the foreign cheerleaders also had to contend with fear as they had never performed stunts and tumbles on the road without mats. However much the team practised and prepared themselves for the performance, hiccups on the ground was almost inevitable. TJ recalls an occasion during rehearsal when a memory card for the LED head gear went missing. The equally “gancheong” and flustered Vietnamese and Singaporeans wanted to comb the parade route to search for the lost card immediately. Their “chill” Thai counterparts suggested buying a new card to input the programming for the parade the next day instead.

Despite the challenges, TJ was very enthused by the dynamism and colour his foreign friends had injected into the performance.

Their ideas and experiences also inspired the local team to break out of conventions to add different dance and music genres and adding elements such as LED lights, travelling tosses and costume changes in their performance. These enriched the creativity of the performance by significant notches.

Besides practices, TJ and his team did not overlook the need to relax and bond outside of their performance preparation time. Local food trails organised allowed the foreign counterparts to experience a much-touted slice of Singapore culture. Over chicken rice which was a common favourite, the diverse team bonded and built camaraderie.

Kudos to CheerForce, the multicultural team, for persevering and sharing their cheerleading dreams and pulling off a stunning performance which we hope will continue to wow the Chingay crowds for years to come.

TJ’s dream is for Chingay to have more talents from the community performing together and more collaborations. His personal dream is to have an international cheerleading group perform live at the Chingay Parade.