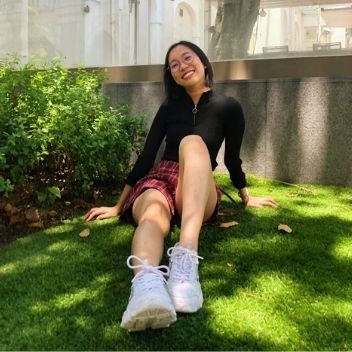 University student Rachael Soh’s love for dance took her from solo dance sessions at her HDB staircase landing to being featured in the ‘Chingay on Wheels’ YouTube mini series on the very first year that Chingay went digital.

In 2021, the Chingay street parade went digital for the first time due to Covid-19. For University student and avid amateur dancer Rachael, this was also the year the Chingay community get to appreciate her unstoppable yearn to dance.

The 20-something uses her HDB staircase landing to perform her elaborate dance routines. With no access to a studio or other suitable space, Racheal saw this seldom-used domain as her own personal dance floor. After all, its obstacle-free and free of charge too. She was also undeterred even though neighbours could see her when they walked by.

At the end of 2020, she posted two of her dance videos on her Instagram Account adding the hashtag #WeGotTalent2021 (WGT 2021). The hashtag essentially placed her posts in a pool of submissions to the Chingay talent competition of the same name. “Why not?”, she recalls asking herself, and then never really giving it much thought after that.

So it was a pleasant surprise when this NTU undergraduate student found out that her videos had caught the eye of the committee. Although they did not chalk up enough online votes to make them winning entries, they earned Racheal a lot of views along with a flood of encouragement from her friends and supporters which fired her enthusiasm to carry on dancing.

Dancing did not feature in Rachael’s life until she started to learn ballet in Secondary school. She was drawn to the gracefulness and beauty of this dance form. From there, her irrepressible need to dance led her to explore other styles, including K-pop and Girls’ Style. The versatile dancer is now adding Hip Hop to her repertoire.

From watching Rachael’s engaging expressions and lively energy as she performs, few would guess that she is a shy and quiet girl. For this introvert, dance is a medium to communicate her emotions without using words.

Room To Be Racheal

Participating at WGT 2021 was a great source of motivation for Racheal to better herself. Through this, she learnt to keep practising hard and learn new choreographies to enter more competitions.

It has also opened new doors for her as, soon after, she was invited to participate in a mini-series, Chingay on Wheels – a first for Rachael to be featured on a professional media platform. Chingay on Wheels is streamed on YouTube and features various home-grown talents of Chingay like Racheal.

As an amateur, Rachael does not have a specific goal except to keep learning and growing as a dancer. To push herself to learn new moves and practice regularly, she frequently posts performances and progress on Instagram.

On a personal level, dance takes Rachael beyond her comfort zone to stretch her talent. In the process, she has learnt to trust herself and her capabilities, and grow her self-confidence.

All this has added more spring to her steps and spurred her to “continue to give my best to what I love - dance”.

Rachael hopes that Chingay will continue to attract people from all walks of life and from everywhere. The millennial also hopes to see more of a hybrid Chingay where participation and spectatorship of the parade can be onsite and on-ground, truly taking the iconic street parade into its new era.