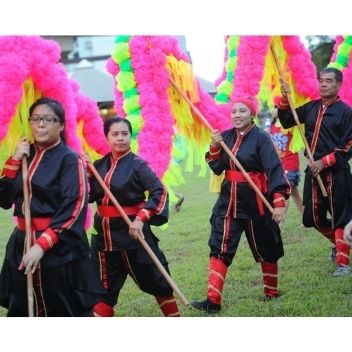 An opportunity to be part of a unique Chingay 40 celebration was simply too good to pass up for grassroot leader Sabaria bte Uma who enjoyed the multicultural experience of learning a unique Chinese traditional dance form.

Chingay 2012 was a truly special one, and when Madam Sabaria heard of an opportunity to be a part of it, she knew she had to be involved.

As a grassroot leader for her Sengkang West community, Madam Sabaria recalls being asked by one of her fellow committee members to join the dragon dance, for the 40th edition of Chingay, to usher in the Year of the Dragon.

“He said to me ‘eh Saba, let’s join the dragon dance’, and I replied ‘are you sure or not?’. Back then I was in my 50s, and when he said that it’s definitely something I’m capable of, I jumped right in,” she says.

What made the 2012 Chingay unique was the fact it was held in a 360 metre-long waterway, specially constructed at the F1 Pit Building to appropriately welcome the year of the Water Dragon.

The item Madam Sabaria took part in was titled Community Dragons of Love, with 28 dragons taking part, a symbol of community and friendship in Singapore. Each dragon needed at least 12 members to make it move and Madam Sabaria made sure the Sengkang West dragon reflected the multi-racial mix of her community.

“Once I accepted the invitation, I quickly spoke to my fellow MAEC (Malay Activity Executive Committee) members and persuaded them to join in. They were worried because they weren’t sure whether they were able to hold up the stick to lift up the dragon but I told them ‘let’s try lah…’.

“I pulled in my husband Israp Salleh and my niece Natra Hamzah and got two other grassroots members from Anchorvale Community Club to join in, and in total there were five of us Malays for our dragon.”

Looking back, Madam Sabaria remembers the challenge of learning how to make the dragon come alive.

“Initially we didn’t know much about the movement of the dragon and had to learn things like where you stand, whether you’re closer to the head or the tail… it was fun. I was in the middle because I was one of the shortest members while my husband was nearer the tail,” she recalls.

“It was the first time I was learning something from another culture. Perhaps it would have been much easier to learn a Chinese dance but this is a dragon – it was something so unique which caught my interest.”

Practising at the waterway presented its challenges too.

“The funniest memory was watching performers struggling to hold up the dragon when they accidentally dipped it into the water. The dragon was made of this material that absorbed water, so you have to make sure to hold it up and not let it touch the water while performing, or else it becomes really heavy and hard to handle.”

Now 61 and with more than 30 years of grassroots activities behind her, Madam Sabaria continues to play an active part in her community and trying to get her seven grandchildren to also be interested in community events.

“It’s nothing new in Singapore for all races to be involved in Chingay, I always see a good mix of races, which is great. We always take turns to attend Chingay” she says.

“I’ve seen overseas performers being invited, which is great as we also get a glimpse of other cultures. For the coming Chingay, my husband and I are contributing ideas for the mini float from our Sengkang West CC and I’m looking forward to playing my part for Chingay50.”

Madam Sabaria’s dream is to see more involvement from other countries to showcase their cultural diversity, especially in our region which is so rich in culture. For the future, she hopes to see this iconic national event continue for another 50 years. She feels Chingay is a significant platform that showcases the multicultural spirit of Singapore for our younger generation to be aware of, and an essential platform where we can all witness and celebrate together.