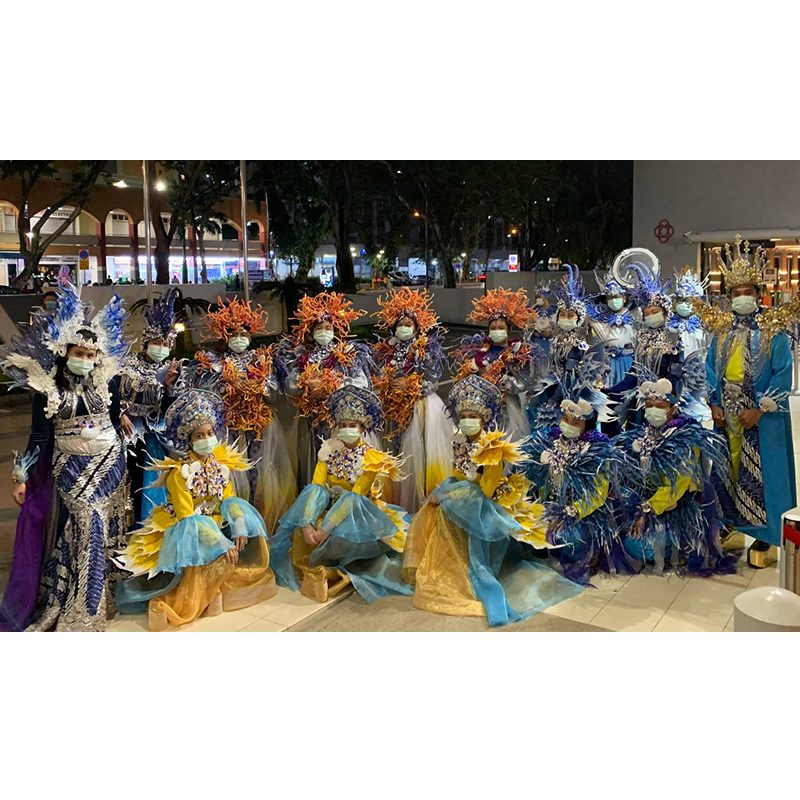 Samson seen squatting, first in the front row from the extreme right

Samson discovered his passion for Malay dance at an early age.

“I was in Wushu training and I saw a group of Malay dancers practising in the school hall. I really liked and enjoyed their performances… and wanted to join in”.

However, he had some apprehensions about joining the then all-female dance troupe and it wasn’t until he was in secondary school that the cast grew in diversity, prompting him to try out. To his delight, he managed to join the Malay dance troupe on his second try.

“As a primary schooler watching Chingay from my neighbourhood, I remember the lights, design of the floats and music that mesmerised me.” Samson recalls sitting with his grandmother and sister, eating chicken wings as they watched the floats pass by.

Although his deep love and appreciation for Chingay can be traced back to his childhood, his mother is really the one he thanks for his evolution from spectator to performer. The first time he watched the whole parade was in 2013 when his mother worked as a volunteer and had tickets affording him a front-row seat!

That certainly turned out to be the case, as Samson continued to participate in Chingay in both 2021 and 2022.

A Parade For The People

His childhood love for the art of Chingay soon evolved into an appreciation of the parade for what it was – a celebration of Singapore and its people.

“To me, Chingay is a celebration of people and culture. It brings people together. Every time you see Chingay, whether it be people performing or watching, you always see smiling faces. It gives people from all walks of life the opportunity to perform together on this one, big and long stage.”

Samson believes that no matter the age, culture or race, everyone can come together to partake in this celebration of Singapore as either a spectator, organising team member or performer. The grand display of multicultural Singapore is truly unique to Chingay and something to be deeply proud of.

When reminiscing on his Chingay moments, it becomes evident that the friends he made and connections he built with his fellow performers are especially dear to him.

“I was really shy when I first joined because I didn’t know a single person except my mum and my sister. I was excited but found it nerve-wracking. When I first learned the steps, I thought it was cool and I liked the beat.

But the minute they asked us to travel and dance, I got goosebumps! I thought: ‘This is it. This is Chingay. Travelling and dancing at the same time is something you can only find in Chingay’.”

Eventually as it progressed, I made a couple of new friends, some of whom I still see nowadays.”

Over the years, I have built bonds with other performers. In a way, the fact that you go through the hardships together – the sweat, sometimes tears and very rarely blood – it all brings you closer to each other. That’s what makes me come back again and again.”

As Chingay moves forward, Samson has no doubts that they will continue to find new innovations to make the parade more interesting with each passing year.

“I hope that Chingay never ends… and that it never forgets its purpose, which is to celebrate people.”