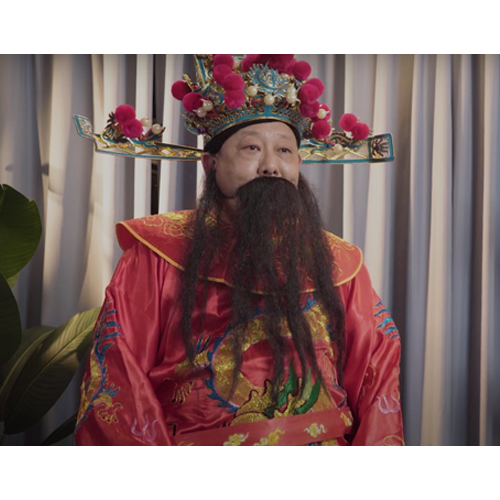 Likely the only Chingay volunteer to have performed as a belly dancer as well as the God of Fortune, Tay Han Seng shares what sustains his 30-year Chingay association.

Han Seng is drawn to Chingay because it creates a very strong Lunar New Year atmosphere that he loves. He wishes to spread the festive spirit to as many people as he can. He began volunteering at Chingay back in 1993, helping behind the scenes in his performance troupe’s props and costumes department. Over the years, he has embraced many different roles, always happy and ready to help wherever he was needed. This includes performing as a belly dancer!

In 2013, Han Seng started reprising this God of Fortune (GOF) role when an opportunity arose to perform together with more than 40 other elderly male and female troupe members. He enjoyed the experience immensely. That sparked his interest and he has continued playing the GOF role at Chingay ever since.

Han Seng, who is a 55-year-old real estate professional, explains, “I think the GOF brings auspiciousness and good fortune.“

“We usually distribute red packets filled with sweets to the audience. People really look forward to the red packets, so they would grab them enthusiastically, creating a very exciting atmosphere.”

Little wonder the GOF is a Chingay crowd magnet, and precisely why the GOF had a two-year hiatus. Han Seng shares, “If not for Covid-19, we would have participated in Chingay this year and last year. But there were concerns that as soon as we appeared, many people would rush towards us to get the red packets. It would have been impossible to maintain safe distancing so we took a two-year break to abide by government regulations.”

The GOF is decked in a resplendent costume that is similar to the dragon robes worn by the Chinese Emperor.

“As soon as I put on the costume, my personality automatically switches over to help me get into the GOF character. It gives me a surge of power every time I wear the costume.

“When I wear the headpiece, I feel like I’m glowing”, reveals Han Seng.

Han Seng’s “mystical power” as the GOF extends to his personal life even when he is “off stage”; it is a source of good fun among his friends, who jokingly ask for auspicious lottery numbers to help them strike lottery!

An Enduring Passion For Chingay

Han Seng says that his troupe is tightly knit, “We share a strong team spirit. I am also happy to see my old friends and also catch up with the seasoned performers from other groups.”

“Besides the familiar faces, I enjoy meeting new people at every Chingay as well.”

These keeping Han Seng going strong as a GOF performer.

“Although I feel very hot and uncomfortable wearing this costume, I am still willing to perform.”

“We have a very tight schedule. You need to arrive early to put on your makeup and get dressed. Also, it is usually very hot. The shoes we are wearing are those worn for Chinese opera so keeping our balance while walking is a challenge, forcing us to pay close attention with every step and walk slowly.

“We mainly enter the stage from the staircase below. Due to the nature of our shoes and costume, it is rather clumsy moving around. We must remind ourselves constantly to be careful; if we stepped on each other, we may cause them to fall.

“Every year, performers from 9 to 10 other countries join us and grace us with different performances we’ve never seen before, bringing in new elements to Chingay.

He firmly believes in upholding this time-honoured and unique Singapore tradition.