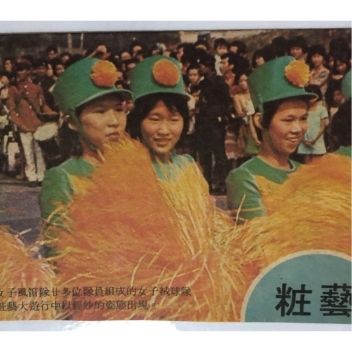 Teo Cheng Kam, 62, first participated as a pom pom cheerleader at Chingay 1976 after completing her ‘O’ Levels. After participating again in 1978, it would be another almost 40 years before she got her long-held dream to perform at Chingay again.

Memories of her early days performing at Chingay parades are very special and dear to Cheng Kam.

She was waiting for her ‘O’ Level results when her teacher announced that the People’s Association (PA) was recruiting for the Singapore Girls’ Piper team. Curious, she immediately signed up together with a few friends.

Little did she expect that this would bring her many memorable moments of her youthful, carefree days.

A Kaleidoscope Of Colourful Memories

She recalls very fondly a humble and patient Japanese teacher who taught the routine for pom pom cheerleading. Communication was not a problem since “we mostly focused on counting the tempo for the performance”, chuckled Cheng Kam.

Another memory she cherished was taking bus rides with her friends to the old PA premise at Kallang for their practice sessions thrice a week. In those days, a bus ride was such a thrill on its own, she enthuses. Till today, Cheng Kam still keeps in touch with these friends and reminisces about those happy “Chingay days”.

Her maiden Chingay performance in 1976 was a blur of excitement, thrill and a tinge of nerves. The performing route took them from Mount Faber to Telok Blangah.

Parading Through Her ‘hood

Vivid in Cheng Kam’s mind was her baton performance in 1978 with the same Chingay contingent. They marched from Marine Terrace where her father’s hawker stall was located, all the way to Joo Chiat – the childhood “kampung” where she grew up in. Seeing familiar places and faces as she marched down the route was so poignant for her and filled her with an inexplicable joy.

Soon, Cheng Kam had to hang up her marching boots to help her father at his hawker stall. Her love for performing took a back seat while the mother of two worked shifts at DFS.

In 2017, as PA was gearing to commemorate Singapore’s bicentennial, Cheng Kam’s chance came again; she was asked to represent Tampines GRC in a flag bearing contingent. The routine was simpler, taking only two rehearsals to familiarise participants with the short walking trail and standing positions at the F1 Pit. That seemed like a warm up for Cheng Kam for her next comeback at Chingay 2019.

That year, she was part of a dancing contingent representing North East CDC. Close to her 60s then, she was unsure she had the energy to keep pace. Yet, she stayed positive in order to motivate “several aunties” she had rallied to join the performance.

True to form, Cheng Kam rose to the occasion without missing a beat.

The events seemed to transport her back to her Chingay performance in the 1970s. Yet, she also saw how far Chingay has come through the years. With modern technology and the use of digital lights, floats and costumes have become more colourful, elaborate and captivating. “The costumes are even more attractive with bling bling lights on them!” she gushed.

The opportunity to interact with the audience at the F1 Pit and Tampines Hub also added to the gaiety of the event. “Taking photographs with the enthusiastic audience made me feel like a celebrity”, she beamed.

As for her dreams for the future of Chingay, Cheng Kam simply hopes that “the show can go on and on”. She is confident that in this digital age, the show can only get better. Social media is really promising for Chingay’s future, already helping to generate a lot of awareness and publicity.