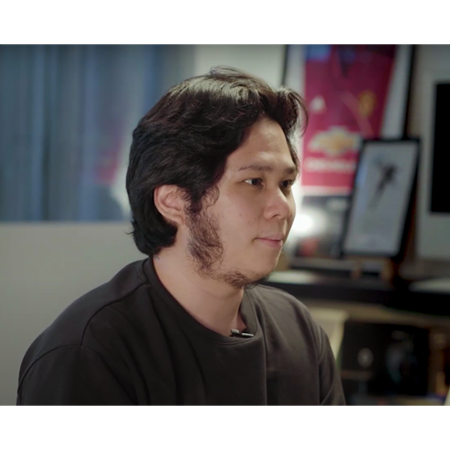 Already an accomplished composer of music for films and other visual media, Ting Si Hao takes on the task of being Chingay’s youngest-ever music director.

Who would have known that an obsession with video game and anime music would lead one day to the musical directorship of Singapore’s biggest parade?

Meet Ting Si Hao, one of Singapore’s brightest young talents who’s already made a name for himself in writing music for films and other visual media, the youngest-ever music director appointed for Chingay.

In his early 30s, Si Hao’s early influences include Nobuo Uemetsu, who wrote the music for the video game Final Fantasy, and Joe Hisashi, who scored all of the films from the vaunted Studio Ghibli.

“I think what really helped me was learning music in a formal environment which opened my mind to all sorts of music”, says Si Hao.

“When I was 16, I released an instrumental album which caught the attention of some local film composer. And I actually managed to score an internship with them and that started my journey professionally into writing music for film and visual media”.

“Nowadays, my influences come from everywhere and I take inspiration from nature as well”.

There is no better time than Chingay50 to check in on the Singapore’s young talents, especially one who has scored for several films, and Si Hao readily accepted the call-up.

“I think what got me interested was the fact that Chingay is Singapore’s largest multicultural show, so diverse and so many different talents involved. I’ve been writing many multicultural music during the last few years, and when this came along, my reaction was ‘Wow, this is perfect!’ ”, he says.

“I get to experiment with a diverse range of music on such a large-scale event and the idea of doing it for the 50th anniversary show really excites me. The creative team explained that it is going to be a big show and they wanted my cinematic elements and approach as well, and that piqued my interest.”

“It’s probably one of my biggest challenges so far and I never had to do so many genres in one project itself and so much music to be written in a short span of time. The entire process was pretty stressful. But thankfully, I survived the process, and the result is out there to see.”

The theme this year is ‘Ignite Our Dreams’, hence Si Hao’s first priority was to collaborate with the creative team to fulfil the vision.

“My role as music director was to find talents to work with, and a lot of them are young and up and coming. Working closely with the creative team this year around was quite special as we have to write the music first with the concept in mind, with the show actually choreographed around the music.

“My role is to work with different producers and composers, while I also took on several of those roles, co-arranging the music with many of my talented peers that I have been wanting to work with for a while.”

An Honour In Itself

Not taking his appointment lightly, Si Hao is aware of the opportunity accorded to him to be working in one of Singapore’s largest events.

“I felt really nervous because it’s such a huge responsibility, and there’s a lot of pressure to perform as I was filling in big shoes from previous music directors”, he says.

“But what helped was the fact I started working quite early in this industry, and am aware of the expectations and the timelines for delivery.

“I’ve done the best that should be done for the show and I’m really honoured to be appointed as music director at such a young age.

“Chingay50 has been a really enriching experience on a musical level and I’ve explored things that I never thought I would and actually managed to push some personal boundaries.

“I’ve gained different perspectives in life and it’s really enriching to be working with some of the younger talents in Singapore as well.”

Si Hao’s dream for Chingay is quite aligned to what Chingay is all about – celebrating our diverse culture across all ages and celebrating talents in Singapore. And my hope for Chingay is that it gets bigger and bigger, and get recognition in the world as a really great show that everyone should watch.

As for its future, Covid-19 has opened up a new realm, with Chingay going digital and becoming more readily accessible to people of my generation, technology will help evolve Chingay and draw more people to Chingay.